In the real-world, Adapter allows two incompatible interfaces to work together. Interfaces may be incompatible, but the inner functionality should suit the need.

The adapter pattern is a software design pattern that allows incompatible classes to work together by converting the interface of one class into an interface expected by the clients. It is often used to make existing classes work with others without modifying their source code. This pattern is also known as Wrapper. 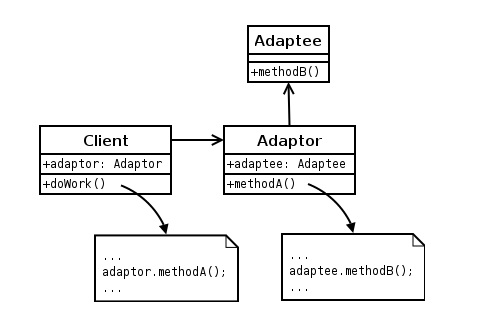 Participants
The participant classes and objects are,

Real life example
Mobile battery needs 5V to charge but the normal socket produces either 220V (India) or 110V~120V (USA). To provide the Targeted power (5V), we use the Mobile charger to charge the battery. Mobile charger works as an adapter between mobile charging socket and the wall socket.

The Adapter design pattern solves problems like,
1. How can a class be reused that does not have an interface that a client requires?
2. How can classes that have incompatible interfaces work together?
3. How can an alternative interface be provided for a class?
Often an (already existing) class can't be reused only because its interface doesn't conform to the interface clients require.

The Adapter design pattern describes how to solve such problems
1. Define a separate Adapter class that converts the (incompatible) interface of a class (Adaptee) into another interface (Target) clients require.
2. Work through an Adapter to work with (reuse) classes that do not have the required interface.

The key idea in this pattern is to work through a separate Adapter that adapts the interface of an (already existing) class without changing it. Clients don't know whether they work with a Target class directly or through an Adapter with a class that does not have the Target interface.

Allow an object to alter its behavior when it’s internal state changes. The object will appear to change its class.

State pattern is one of the behavioral design patterns which is used when an Object changes its behavior based on its internal state.

If we need to change the behavior of an object based on its state, we can define state variable in the Object and use if-else condition block to perform different actions based on the state. This approach is inflexible as we need to add an if-else block in the class for the new state. However, State pattern is used to provide a systematic and loosely-coupled way to achieve this (state change) through Context and State implementations.

Participants
The classes and objects participating in state design pattern:
Context
It defines the interface of interest to clients and maintains an instance of a ConcreteState subclass that defines the current state.

State
It defines an interface for encapsulating the behavior associated with a particular state of the Context.

ConcreteState
Each subclass implements a behavior associated with a state of Context.

Implementing state-specific behavior directly (using if-else block) within a class is inflexible because it commits the class to a particular behavior and makes it impossible to add a new state or change the behavior of an existing state later without changing the class (developers need to add a new if-else block for new state).

This makes a class independent of how state-specific behavior is implemented. New states can be added by defining new state classes. A class can change its behavior at run-time by changing its current state object.

According to the Gang of Four


Provide an interface for creating families of related or dependent objects without specifying their concrete classes.

Intent
Provide an interface for creating families of related or dependent objects without specifying their concrete classes.

Abstract factory pattern provides a way to encapsulate a group of individual factories that have a common theme. It provides an interface (or abstract class) for creating families of related or dependent objects without specifying their concrete classes.

Strategy pattern is used when we have multiple algorithms for a specific task and client decides the actual implementation need to be used at runtime.

The strategy pattern defines multiple algorithms/classes, encapsulates each algorithm, and makes the algorithms interchangeable within that family. Strategy lets the algorithm vary independently from clients that use it.

Elements Strategy Pattern
Strategy (SortStrategy)
It is a Common Interface that implemented by to all supported algorithms (ConcreteStrategy).

What problems can the Strategy design pattern solve?
1. A class should be configured with an algorithm instead of implementing an algorithm directly.
2. An algorithm should be selected and exchanged at run-time.

Implementing an algorithm directly within the class that uses the algorithm is inflexible because it commits the class to a particular algorithm at compile-time and makes it impossible to change the algorithm later independently from (without having to change) the class. This also stops the class from being reusable when another algorithm should be used.