What is Java ClassLoader?

As we know Java Program runs on Java Virtual Machine (JVM) when we compile a Java Class, it transforms it in the form of bytecode that is platform and machine independent compiled the program and stores it as a .class file. After that when we try to use a Class, Java ClassLoader loads that class into memory.

The Java Classloader is a part of the JRE that dynamically loads Java classes into the JVM. Usually, classes are only loaded on demand. The Java runtime system does not need to know about files and file systems because of class loaders. It is one of the crucial but rarely used components of Java in Project Development.

System class loader
It loads classes from the current classpath that can be set while invoking a program using -cp or -classpath command line options. This is implemented by the sun.misc.Launcher$AppClassLoader class.

How does Java ClassLoader Work? 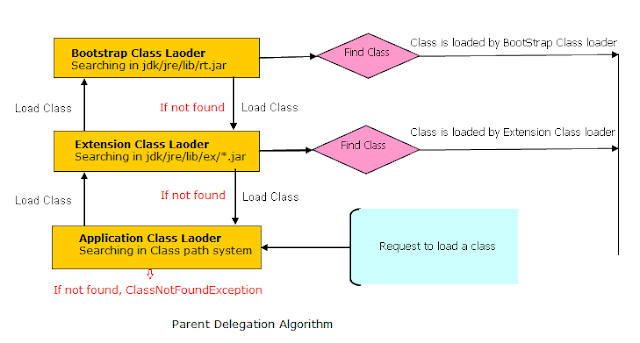 1. When JVM requests for a class, it invokes the loadClass function of the ClassLoader by passing the fully classified name of the Class.

2. loadClass function calls for findLoadedClass() method to check that the class has been already loaded or not.